While I normally use this blog to just post artwork, I came across this bit of news the other day and had to post a link to it: http://www.1up.com/do/newsStory?cId=3163721

Now lately I haven't been playing too many video games, but when I saw the trailer for the long awaited Street Fighter IV I was definitely floored, and aside from maybe the next installment of Super Smash Bros., this is the game I've been waiting for. Hopefully Capcom will keep the newest SF traditional to it's pixelated roots and not make it 3d (they already did that with the EX games and those weren't so great) but judging from the trailer it looks like they may take it into 3D which may not be so bad if they can actually make the graphics look as cool and stylish as they do in the trailer. Anyway, Capcom is supposed to be releasing more info on the game within the next week but for now the trailer will do as Street Fighter fans can only speculate on how the game is going to play.
Oh yeah, for fun and because the trailer got me so excited about the game, I just had to do a quick sketch of Ryu getting ready for battle. The first image is a cleaner version done in my regular style, while the one after that is a grittier version that I played around with a bit in photoshop. 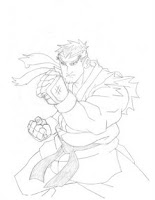 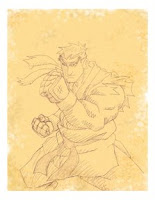 Posted by Marcus Muller at 6:20 PM

View my complete profile
Click here to view some of my artwork.


Feel free to email me at: marcusmuller_artwork@yahoo.com