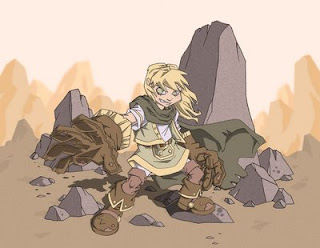 I like to do warm up sketches to loosen things up a bit and take off any pressure of working on a page. So, since I was sick of doing the same old superhero stuff, I decided I should sketch something of the non-cape variety from comics.
Back in high school I was a big fan of Joe Madureira's Battle Chasers comic, and since, to my surprise, I never even once attempted to draw a character from that comic I figured I'd take a stab at it. I figured the sketch turned out alright so I'd do a clean copy of it and color it (because I needed the practice.)
Looking back at those comics for character reference for this image, I was surprised by how well those comics hold up even today (especially those last 2 issues which look pretty great.) They were pretty fun reads too, it's just too bad there's not really anything coming out in the fantasy genre nowadays.
Posted by Marcus Muller at 7:06 PM

View my complete profile
Click here to view some of my artwork.


Feel free to email me at: marcusmuller_artwork@yahoo.com